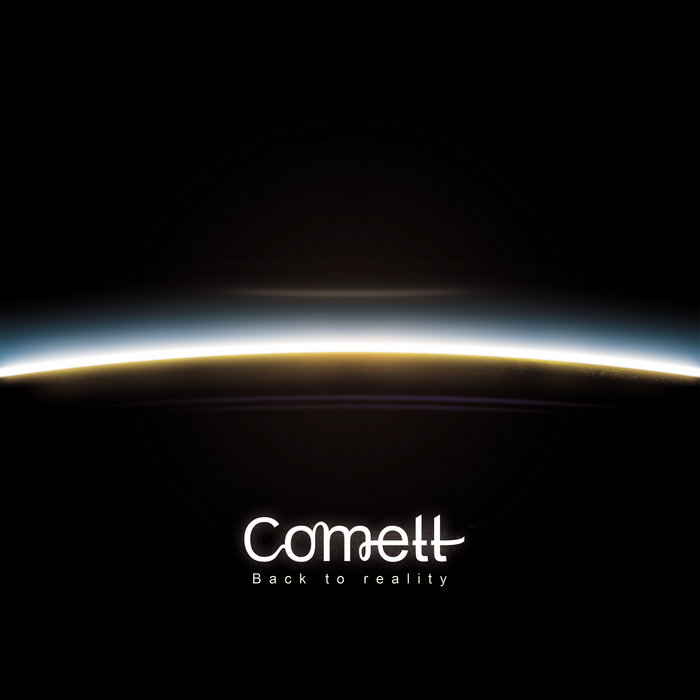 After the release of their very dreamlike first album, "My reality is your fiction" Comett is back with a rougher and more complex album.

Comett is an alternative pop duo founded in 2009, composed of Alexandre (Guitar / Keyboards / Vocals) and Julien (drums / programming). Comet has the particularity of being based in both Paris and Tours.

JD Beauvalet (www.lesinrocks.com) wrote of their first album; "it is from the cosmos that this pop tumbles with the stars, in all its excesses and ambitions”. “BACK TO REALITY”, the new album, is a superb collection of 8 songs that includes the pop and delicate side of the duo, but that also contains more organic and muscle-rock songs, inspired by their main influences: Radiohead and The Notwist.
After a first album "My reality is your fiction" which took a while to be released (4 years), this latest installment was recorded in a studio in just 15 days.
Comett recorded this last album at tram 28 studio in Saint- Clais (72) in order to benefit from the experience of Fabien Tessier (The Apartments , 49 Swimming pool , Pagan poetry ), and to produce a more organic and energetic album without putting aside the synthetic colors that the duet cherishes.

It is precisely through a dark and frenetic synthetic bass line that this album starts. “Love2.0 " contains a chiseled chorus flanked by sharp guitars ending with a surprising finale. This groovy and down-tempo song is split into two parts - a change of rhythm of which the duet is particularly fond.
.

Throughout the album, the duo likes to confuse the listeners! Comett integrates rough guitar scores and steep synthesizers with flashy acoustic guitars or felted pianos. The duo does not forget though that Comett is primarily a pop band offering melodies and heady tunes like "You only live Once" or the very upbeat "Dancing at the Paradise ". Having been recorded​​ “live”, "Inside My Head" and "Animal" are rock songs based on the guitar / drum combination, which emphasize the darker side of this second instalment.
Unlike the first album which was telling a story, this second album deals more with personal themes, and subtly introduces French lyrics in some songs ( " Love 2.0 " " You only live once" ). This is treated frankly and without cliché in the haunting song "My Reality", which draws a fine dichotomy between a purely electronic production and the warmth of the instruments.
The album ends with the title track "Back to reality ", a simple song without any subterfuge that really marks the musical maturity of Comett.
While still preserving their signature style, Comett moves towards a more complex and organic music, harmoniously blending the refined and the upbeat side of its pop music.

Are you looking for something that’s right inside you

I’m feeling sad, i ain’t happy (You could)
I lost my faith i lost my way
Oh damn it’s over again

I’m feeling sad, i ain’t happy (You could)
I lost my faith i lost my way
Oh dam it’s over again

I have to say I’m not a fashion man, I’m unknown;
I’m not the type of guy you gonna meet in a club;
I’ld rather stay at home, recording my own songs;
And I want to believe, It’ll be the only thing you’ll recall;

Give me just one chance;
If you press play It’ll be ok;
Maybe, it’s not perfect;
But you’ll play the song again and again;

Je fuis comme les autres
Track Name: You only live once
I don’t want to waste my time, even for one hour;
We don’t last for ever, it’s seems to be;
I can’t wait the finish line to get any pleasure;
Surpris par mes remords et puis l’envie ;

I don’t want to feel one day the light, and never
Understand I’ve got only one life, it’s over

I don’t want to feel one day the light, and never
Understand I’ve got only one life, it’s over

I won’t be patient, i want everything now;

I don’t want to feel one day the light, and never
Understand I’ve got only one life, Game over
Track Name: Inside my head
Sometimes, I can’t explain, what’s right, what’s in my head;

Demon, why do you call me tonight;
Blind game, you’re testing me inside;
You know my face, you know my name, you know my singularities;
You know I hate to be yourself, and you are standing here in the dark.

Burning, yes I’m burning inside;
Suffering, but you know this place is mine.

She’s right, it’s not too late, with her smile, she can cure me and I’ll be safe.

Demon, why do you call me tonight;
Blind game, you’re testing me inside;
You know my face, you know my name, you know my singularities;
You know I hate to be yourself, and you are standing here in the dark.

There’s no escape,
Under the blade
There’s no shame
Cos i try to breathe again

I wanna be you
you seem so special

There’s no escape,
Under the blade
There’s no shame
Cos i try to breathe again

I wanna be you
You seem so special

I rebirth again and again and again…
Track Name: Animal
Could I ever be a brighter person;
That’s always a wish, I’ve never reached the goal ;
Could I find the key to many questions?
When I find a way, you always shut the door

There’re so many dreams on television.
Too hard to believe you’re waiting for the call
They don’t want to see my indecision
I’m losing my edge soon I’m going to fall

Why do you steal my friends, my freedom?
Track Name: Back to reality
Walking down the city, where the TVs start to think,
Where the lights stay up forever, and you don’t know what to feel.
I switch on my computer, play a melody, I’m setting up the engine, counting 0,1,2,3.

Are you coming to find me?
Everytime, you walk away,
But this time I have to leave (live),
I love, but there’s nothing I can do.

Bandcamp Daily  your guide to the world of Bandcamp